Both the Dead or Alive, and the Dragonball series have recently brought new characters to light. These two new ladies are just what the doctor ordered.

Square Enix and Yoko Taro partner up for a new smartphone game. I love the music in this trailer. The synopsis can be found down below.

That story that was read to you as a child, about a beautiful princess and a strong hero.

But there’s something we don’t know… that the girls are still wandering.

This is the imprisoned world, “Library,” a place that is stuck in an endless loop in this story.

The characters who appear in this story gather. The girls only have one wish. To revive the “author.”

Its the future desired by those who hold their respective darkness.

What awaits for the girls who wish for the revival of their creator?”

I Love How Angry Velvet Is Lol

The intensity is real.

I’m happy about this. I wanted to play it when it first came out, but never got around to buying it when I had a 360.

I’m laughing my ass off at how awesome this trailer was. Please let this get localized somehow. Omega Labyrinth just looks so fun and entertaining lol.

I am extremely pleased with what I saw. The setting was dark and creepy which was nice and fitting, the gameplay was reminiscent of the Souls games, but looked a little quicker (Loved the fast dodging), loved the weapon that he was wielding as it had multiple attacks an could transform from what I saw, and when the boss showed it up it was really cool as the music changed and all. Definitely a day 1 for me.

Out of all the Senran Kagura games coming out, Senran Kagura 2 is my most anticipated. Senran Kagura 2: Deep Crimson comes out for the 3DS in Japan August 7th, but since the series has become an established franchise you know it will be headed Westward in a matter of time; and I can’t wait =^_^=

For those who haven’t been keeping up with it, Sailor Moon Crystal will finally air this year starting on July 5th 2014. The anime will be 26 episodes, streamed on NicoNico worldwide, with 1 episode airing every two weeks. The series has also been licensed for North America by Viz Media. I don’t know about you all, but I’m pretty excited as the Sailor Moon series is a well known classic

Tales Of Zestiria Is Looking Great!

Here’s the new 3rd PV for the game.

We may not have the game yet, but at least we’ll be able to watch the anime. The Blade & Soul anime will start this spring. The animation style looks really nice. Here’s to hoping it does well once released =^_^= 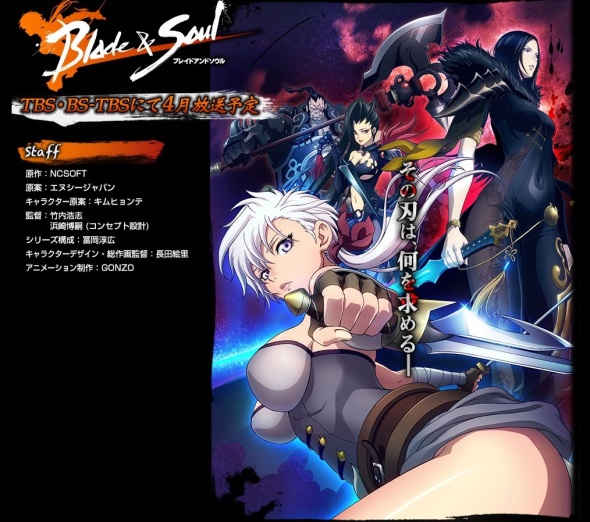 I still actually need to finish the series, but just thought I’d inform you all of the upcoming movie. This movie will also feature ~The Million Live Gals~ originally from the Gree card game.

A new Sword Art Online game was announced for the Vita. Kirito meets a mysterious girl who is rumored to play a major role in the game. I wish they would locliaze one of the games already lol. Take a look at the trailer below:

Boobies. That is all. And Lolz @ Kuroneko XD

Still hoping someone conceives a localization for this series =^_^=

Mind 0 comes out in Japan this Thursday.

This looks to be a new rhythm game from SEGA. The red silhouette is Azuki, and the green silhouette is Maccha. Not much is known about the project yet, but it seems that Project 575 will officially be revealed tomorrow, July 18th, on NicoNico Douga.

The song that they’re singing in the video is called “Fly Forward, Class!” composed by Vocaloid artist Lamaze-P.

Tales Of Xillia 2 Confirmed For U.S. And Europe!

This is footage straight from the Japan Expo this year, and it shows Lightning traveling through an area known as the Dead Dunes, fighting various monsters, and progressing with the story a bit. Lightning Returns comes out February 2014 in North America and November 2013 in Japan. The game is also coming out in Europe sometime too.